1. It is caused by a virus belonging to a group called Arbovirus and is transmitted by mosquito bite. Dengue fever is another disease belonging to the same group.

2. It is not related to chicken and is different from bird flu. Bird flu is also caused by a virus called avian influenza virus and is a more serious disease than Chikungunya.

3. The disease is spread by bite of Aedes mosquitoes (or tiger mosquito, in view of presence of striations on its body similar to a tiger). This mosquito breeds in fresh waters unlike those spreading malaria, which develop in stagnant water. This mosquito usually bites during the daytime. 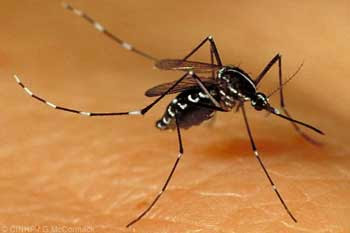 4. The disease manifests with acute onset of body ache including muscle and joint. pains, fever, and skin rash. Painful swelling of hands and feet may be commonly seen. The body responds to the infection by producing antibodies against the virus and these antibodies may be detected in lab and give a clue to the diagnosis.

5. Like most of the other viral infections, this disease also improves over 2-3 weeks spontaneously, however muscle and joint pains may persists for months in a minority.

6. The disease usually is not associated with mortality or serious complications.

7. The treatment is essentially for the symptoms with painkillers and anti-pyretics.

8. The disease can be controlled by hygienic precautions essentially prevention of mosquito breeding places like open jars, flowerpots etc.

9. Dengue fever is a close mimic of Chikungunya and is transmitted by the same Aedes mosquito. Here, severe pains including backache and sometimes bleeding manifestations can be seen.